Have you ever sat in Wrigley Field and wondered if you could hit a home run?
If so, how many swings would you need?
Would you go to left or right field?

More people have considered these questions than I would guess. I have my scenario down solid. With center field being 400ft and left-center 368 combined with the fact I haven’t hit much of anything outside a softball, I would steer clear of those pipe dreams. Left field at 355ft and right field at 353ft seem infinitely more attainable. I am (was) a pull hitter so left field is my choice…to hell with the two-foot difference over right field! This is my pipe dream, leave me to it.

I would need to hearken back to the old school approach to hitting…the one where I specifically tell the pitcher where to throw his fastball (up and slightly in) to give me any sort of shot at hitting one out. I would say give me 10 at bats to find a groove and a gale force wind blowing out and I would be able to barely clear the basket.

The Wrigley blueprint and these sorts of mindless daydreams inspired the Wrigley Blueprint T-shirt. So, tell me, could you hit one out? What would it take?

The scene was perfectly set. The lowly Brewers in town. Cubs needing one win to clinch the division. Ticket prices skyrocketing as fans filled Wrigley 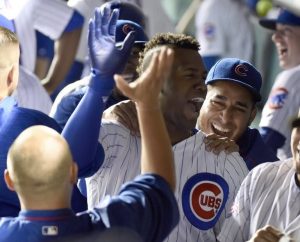 to it’s max capacity to see the Cubs clinch at home. A sight not seen since 2008.

All started well as Soler pounded a two-run homer at light speed into the left-field bleachers. Montgomery was pitching well. But then things turned a bit. Addison Russell, the normally sure-handed shortstop, got a case of the yips. Three bad throws to Rizzo (only two of which were errors as Rizzo managed to pluck one from the sky on a leaping grab) gave the Brewers extra outs. Even a team as bad as Milwaukee cannot be toyed with in such a manner! They made the Cubs pay and took a 5-4 win o a night where fans dang near demanded a win.

All was not lost.

On the West Coast, the Giants and Cardinals were getting underway. If Cardinals lose, the Cubs will clinch. A Cardinals win means the Cubs team needs to rally for their Friday game against the Brewers and pull out a win. No need. The Cardinals falter and the Giants assure a clinch for the Cubs.

No more magic number needed. The Cubs can now shape their rotation, rest schedule and efforts towards maximizing the potential come playoff time. To honor the 2016 Division Champion Cubs and support their run into the playoffs, now is the time to buy your Cubs gear and tshirts!